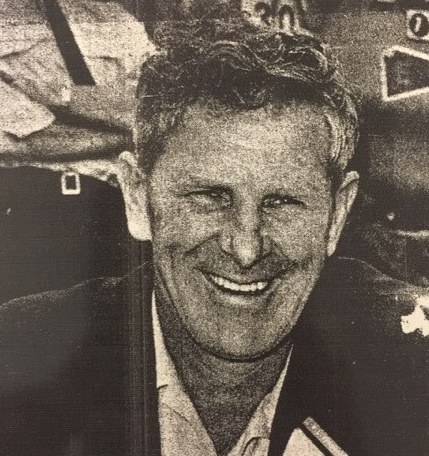 At the young age of 16 years he began competitive chopping, attending carnivals with his father and two younger brothers in most of the country towns in Tasmania. Geoff was a fine standing young man, six foot three inches tall, and weight in at eighteen stone. Success was easy for this talented young man who had natural ability with axe in hand.

Geoff was a great threat to the champions of the day. He would borrow an axe from another axemen and without any training he would enter the ring and regularly win the event of the day.

In an interview given many years ago by Neville French from Wynyard Tasmania, Neville stated that his toughest opponent in woodchopping championships was Geoff Binns.

Geoff spent his working life employed in sawmills, also Bushing Timber, Truck Driving and the Police Force. He was a very active member of the Launceston Aero Club gaining a Pilots Licence and flying small aircraft.

He was married to Gwen Cunningham in the 18th November 1950. Five children were born to this couple. It was very sad for his family when Geoff was killed instantly in a trucking accident near Bridport on the 19th January 1993.

Always remembered and fondly known as ‘Big Geoff’ to all his sporting colleagues in Australia.