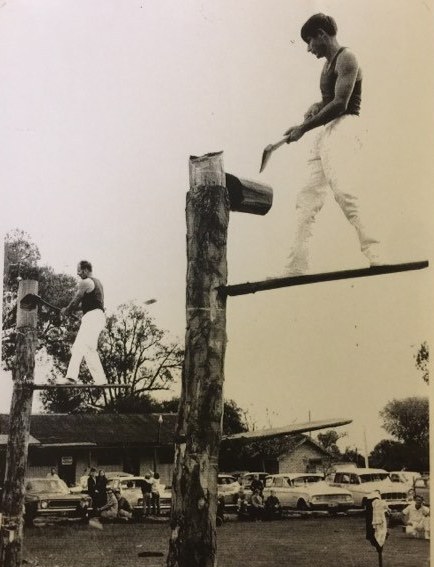 It all began for Bob in 1956 at the age of 19 when he won his first event in woodchopping, the 12 inch underhand at the Donnelly River Mill. Following his success, Bob returned the following year and won the same title making him a back-to-back champion.

Bob married Shirley and has three childre, Kylie, Brett and Nicole. They Reynolds name will continue throughout the nest generation of woodchopping with Brett and his own four sons following their dad and granddad’s footsteps.

Bob worked as a forestry worker which enabled him to inspect timber everyday. He soon found that his favourite event was the physically taxing tree-felling event.

Bob was instrumental in establishment of the local clubs rooms for the Progressive Axemen’s Association. After tirelessly lobbying the local Shire Council to acquire the land he then raised the money for the buikding which was opened on June 20th, 1993.

He was president of teh PAA for 26 years and offciating handicapper for 10 years.

In 1987 Bob was awarded Life Membership to the PAA honouring the tireless years of service.

He was crowned 2008 Veteran of the Year and still competes today while also carrying out administrative duties for the PAA.

Althoguh he continues to compete today, Bob also enjoys fishing, garndening and coaching his grandsons on how to wield and axe and cut the perfect board hole.