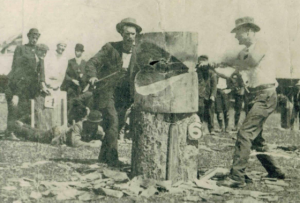 Samuel Johnson was born on the 1st May 1882 at Wynyard. Little is known about his parents, he had one son of his Charles Max. Samuel resided in a few places, Kindred and Wilmot in Tasmania and Bisborne in New Zealand. Sam was a bush worker and farmer here and in New Zealand. His favourite pastime was trout fishing.

Samuel’s favourite disciplines were both standing and underhand blocks.

Many Kiwis retained special memories of Sam. One of these was David Smith of Gisborne who later became his brother-in-law. To quote David:

I must have been about 8 years old when one day Sam asked me if I would like to go with him to the chops, I said yes so away we went. When we arrived he found me a good seat in the stand then went to the chopping ring. Later he came back and brought me some refreshments, showed me where the toilets were then returned to the ring. I was able to watch it all. It was one of his good days, he won everything.