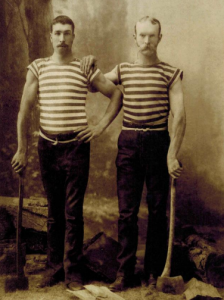 Born at Deloraine on the 1oth November 1870 to John Marshall and Eliza Marshall Nee Carling.

Jim married and had 10 children, worked as a farmer and his favourite discipline was the standing block.

Jim Marshall of Sprent was fondly known and respectfully known among the Woodchopping fraternity as the ‘Lightening Axeman’. He was about 6ft 1in in height and weighed over 14 stone. His statue was superbly proportioned and he combined artistry in his work with terrific power and speed. He is described as a competent and shrewd axeman with an inquiring mind.

He was first to experiment with different types and weights of axes and applies them to various native timbers in order to find the best axe for the task. He also tried various sharpening techniques and was the first Tasmanian to perfect the art of grinding axes.

In 1892 and 1893 respectfully at Latrobe, both events were championships.

In a handicap in 1902 Jim competed against a chopper named Bingham, who beat Jim by 10 seconds in the heat, semi and final. Bingham had a 75 second start in all events.

Jim Marshall’s chopping career ended when he broke down in the thighs and couldn’t continue training. He training several great axemen, including Tom Petit of NSW who went on to win Championships and became known as the only axeman to hold Wold Chopping and Sawing Championships at the same time (1900, 1902, 1905).

Jim is pictured here with his hand on Tom Petit’s shoulder.

James Marshall had on display the largest chips from a chopping block at museum in London. He is the Tasmanian Champion and his own country fellers of trees tremble at his doughty deeds.