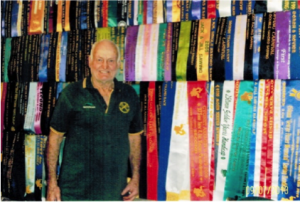 George was born on the 2nd of February 1935 into a woodchopping family. His father chopped along with 3 of his uncles & 5 of his brothers.

He first sawed when he & his brother cut down a tree to build his first home. George started chopping & sawing when he was 15. 1950 Port Arthur Sports carnival was his first chop. George has competed with his brothers, son, daughters, granddaughters & grandsons along with numerous others during his 63 year sporting career.

In 1978 George & Tony Watson sawed an 18inch hardwood log in 7 secs – it is recorded in the Guiness Book of records. In 1986 George’s hand was almost severed in a chainsaw accident in the bush – after micro surgery he was told he would never chop or saw again. With determination & a special sawing handle George returned to his sport.

His highlight – sawing with David Foster & winning. As a 40 year committee member, mentor to youth & newcomers, log hauler & trimmer and a still enthusiastic competitor George, at 80 is a popular & much valued member.