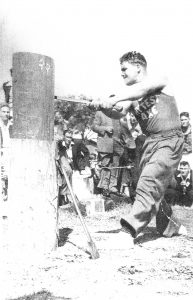 Jum was born on May 17,1923 to farming parents Walter and Alice Widderson and started his woodchopping career in 1942 at the age of 19. His occupation as a farmer and logging contractor kept him physically fit for his wood chopping competitions.

Underhand was his favourite event. He won the first two events he ever competed in, both being underhand events in Boddington WA on February 28, 1942 for which he proudly accepted the prize money of 3 pound 10 shillings.1948 saw Jum’s influence take hold in the sport with him winning The WA Axeman’s title in the 14inch underhand, a title he continued to hold for another four years. A highlight of his woodchopping career was exhibiting the sport to royal visitors. He was chosen to participate in an exhibition chop in front of Her Majesty Queen Elizabeth ll in 1948 and then again for Princess Margaret in 1972 at an event in Bunbury.

In 1952 Jum married the love of his life Daphne Froome and have four children Vicki, Shelly, Beau and Tania. His son Beau followed in his footsteps and started woodchopping. He can now boast a legacy of eight grand children and two great grandchildren.

Jum was a member of the World Series team that travelled to Tasmania in 1974 and again in Western Australia in 1979. The 12inch underhand record of 22 5/8 seconds was held by Jum for 22 years.

Jum competed at the Brunswick Junction Show consecutively for 36 years.

He was heavily involved with the Western Australian Axeman’s League for a total of 38 years, in which time he held many positions including president (for a five year span) judge and organiser. He received life membership to the League in 1978 he was also a recipient of a testimonial dinner for his 40 years of service to woodchopping.

Jum officially retired from woodchopping in 1988 but with the love of the sport still running in his veins he took on a role as a Judge at the Royal Perth Show for which he performed for many years to follow.

To end a stellar career he was awarded the Order of Australia Medal for his outstanding contribution to the sport of woodchopping through the Western Australian Axeman’s League.

Jum is now referred to as Walter “Jumbo” Widderson O.A.M.