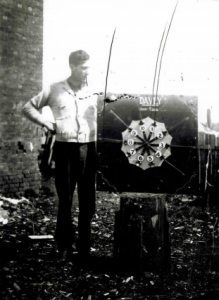 Known as William or Bill Davey he was seen around the chopping areas in the late twenties and early thirties. Among his many trophies was a giant cup which he won in 1932 at the Deloraine Sports meet. This trophy was awarded to him for winning the twelve inch Tasmanian Championship chop. On the same day he also won the Golden Valley and Alverston Handicap. The ten inch Golden Valley Handicap was cut in eleven seconds, this was the fastest time ever for a ten inch chop. That time was held by Bill for many years until Merv Youd broke it.

Quote from the Examiner November 1931:

The feature of Saturday’s events was the success of W. Davey of Westbury who scooped the pool by winning the Tasmanian Championship, the Alverston Handicap and the Golden Valley Handicap. Most interest centred on the chopping matches of which there were three and there were considerable hilarity when W. Davey chopped his way through three heats, a semi final and three finals and bagged the lot. Davey received a great ovation which he thoroughly deserved. The finals of the Golden Alverston Handicaps followed in succession so he did very well to win.

He invented and made the first Judging Machine for chopping in the 1920s. Over the nest years he made three machines and hired them out to chopping meets throughout the North and North West of Tasmania. One was later sold to the Northern Axemen’s Association. The idea of making a Judging Machine came about because some competitors showed dissatisfaction with the judges decisions which was then made with the eye.

Bill was one of the Tasmanian axemen who was chosen to chop in front of the Duce of Gloucestor when he visited Burnie in 1934. He chopped through the 18inch block and was awarded fought on the day.

Bill had eight sons and five of those eight used the axe with some success.They were Owen, Henry, Charlie, David and Barry. For some it was merely a sport to enjoy with their dad on the North West Coast, but Henry took to the ring with great enthusiasm and won many trophies in the fifties and early sixties. Barry the second youngest of the boys talks about the time when Bill and he chopped together and the Kindred Sports (Bill was 65). Bill was the winner and Barry was second. On the second chop of the day the winner was reversed.